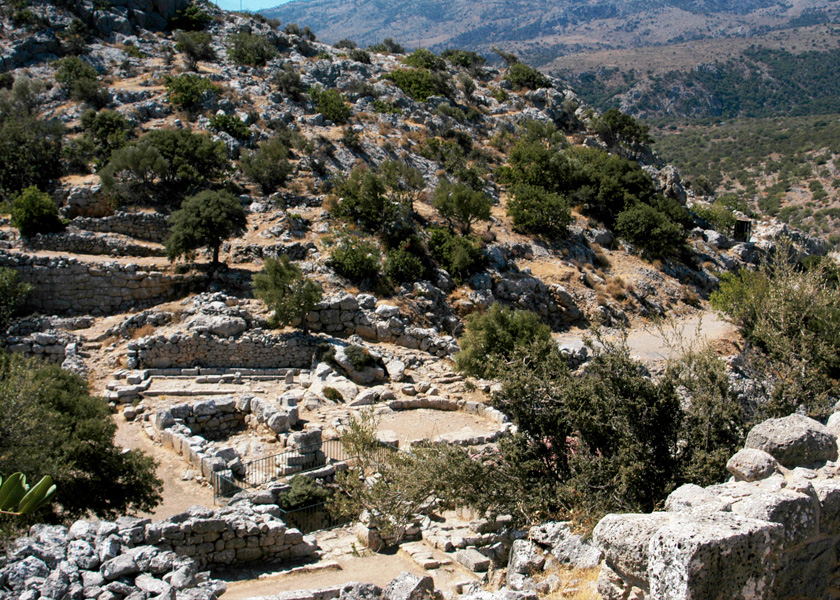 The ruins of ancient Lato are located approximately 3km north of Kritsa, scattered between two hills at an altitude of 380m. This site has a stunning view over the bay of Mirabello.

The name Lato has been taken after the Dorian pronunciation of the goddess Leto, who probably was worshipped here. However, the patron of the city was the goddess of childbirth, Eileithyia, who is depicted on the coins of Lato.

Moverer in Lato, the admiral of Alexander the Great, Nearchus (360 to 312 BC) was born. His father Androtimos was the ruler of Lato and moved to Macedonia, where he became an adviser to King Philip II. Young Nearchus followed him and grew along with his friend Alexander, also having Aristotle as his tutor.

The town existed in the Minoan period but actually flourished after the Dorian invasion. It had been inhabited until the Roman era when it started to decline. Lato was one of the strongest cities in Crete, as evidenced by the agreements (based on extant inscriptions) with other towns.

The port of Lato was on the site of today’s Agios Nikolaos which was back then called ‘‘Kamara’’. ‘‘Kamara’’ during the 3rd-2nd century BC, finally took the lead from its mother-town Lato and developed rapidly like most seaside places on Crete due to the development of maritime trade.

Lato is a widely visited archaeological site which is considered the best-preserved town of the classical - Hellenistic period in Crete and is one of the most complete in Greece. Here you will see the fortifications, the market, the Prytaneum, the little theater, temples, public buildings, cisterns, etc.